“I am only one, but I am one. I can’t do everything, but I can do something.” Edward Everett Hale, American author 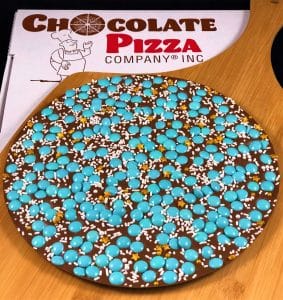 Making a difference starts with doing just one thing. Whatever that one thing is, do it. Chocolate Pizza Company is approached hundreds of times a year for charitable causes. Each of them is important. Each is worthy. But we must make choices and so we embrace Edward Hale’s advice, “I can’t do everything, but I can do something.”

The Parkinson’s Foundation uses the color teal to represent their work so we did as well. Our chocolatiers created a special edition Chocolate Pizza that captures the teal color scheme. We start with our signature blend of milk or dark gourmet chocolate blended with homemade English toffee. Next, we top it with a generous helping of teal colored chocolate gems, a splash of gold sugar stars and finally a dusting of white sprinkles.

By offering this item, Chocolate Pizza Company makes “doing something” easy for individuals and organizations who want to help in the fight against Parkinson’s disease. Whether you buy one Chocolate Pizza or hundreds, every purchase “does something.” We can all participate. 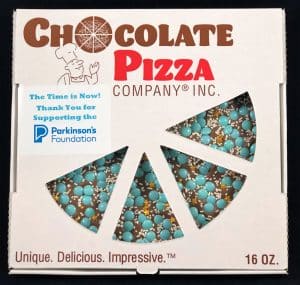 The impact of Parkinson’s disease is felt over time. It is a progressive disease that attacks the nervous system and limits movement. More than 10 million people live with Parkinson’s disease. Our understanding of this disease has grown dramatically. But there is a lot to learn if we are to find a cure.

According to the Mayo Clinic, “Parkinson’s disease is a progressive nervous system disorder that affects movement. Symptoms start gradually, sometimes starting with a barely noticeable tremor in just one hand. Tremors are common, but the disorder also commonly causes stiffness or slowing of movement. In the early stages of Parkinson’s disease, your face may show little or no expression. Your arms may not swing when you walk. Your speech may become soft or slurred. Parkinson’s disease symptoms worsen as your condition progresses over time.”

The Parkinson’s Foundation supports critical work in areas of medical research. Similarly, they also promote lifestyle improvements for those battling the disease.

Owner, Ryan Novak, started with Chocolate Pizza Company as a dishwasher at age 15. It was a small-town chocolate shop that made a handful of products. But Ryan saw it as much more. He graduated from Marcellus High School and attended Syracuse University. The opportunity to own Chocolate Pizza Company came in 2010. Ryan was 21 years-old and still a senior in college. But he jumped at it.