A Brief History of Valentine’s Day

If you want to understand why chocolate and Valentine’s go together so well, it would be helpful to take a brief look at the history of Valentine’s Day itself. The origins of this day of love most likely stem from an ancient pagan holiday celebrated in Rome – before Rome was ever an empire – named Lupercalia. This festive February day was eventually co-opted by the Roman Church (centuries later) and transformed into a Catholic day of feasting in honor of a martyred saint named Valentine.

And while many saints went by the name of Valentine over the years, the legend that endured is one of a Valentine who was a Roman priest. This priest married soldiers to their spouses in secret, because at the time, marriage was forbidden to military men. The logic behind the decree was that soldiers with wives would be distracted by domestic life, making them less effective fighters. If a soldier wanted to find Saint Valentine to perform a clandestine wedding, the secretive priest could be identified by the ring he wore on his hand, which had a Cupid engraved on it as a symbol of love. 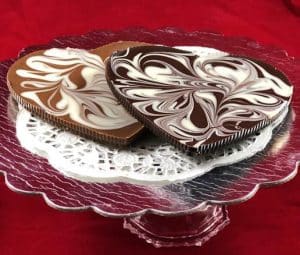 Why We Give Chocolate on Valentine’s Day

Over the centuries, St. Valentine’s Day evolved into a day to demonstrate our warmer emotions, especially in English-speaking countries – but chocolate still hadn’t entered the picture yet. Flowers, often roses, and cards were exchanged to express courtly affection and love. Sugar-based goodies were still too expensive and rare to hand out every year to the people you venerated.

It wasn’t until the mid-1800s that Valentine’s Day chocolate entered the picture. The British chocolate industry, focused on making better-tasting drinking chocolate, enhanced the cocoa butter-extraction process. These extraction improvements quickly led to an overabundance of cocoa butter. The surplus butter was used to produce chocolates meant for eating, not drinking. Soon after, these bite-sized chocolates were marketed to the public in attractive (often heart-shaped) reusable decorative boxes for Valentine’s Day. And voilà, the tradition of giving chocolate on Valentine’s Day was born. 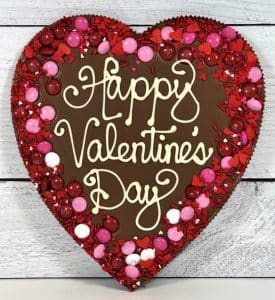 How much chocolate is sold on Valentine’s Day? Well, an unscientific estimate would be a heck of a lot. If you want to get down to the nitty-gritty, when looking at the United States, men and women spend almost 20 billion dollars on gifts and romantic gestures (trips, gifts, dinners out, etc.) during Cupid’s holiday every year.

Focusing on Valentine’s Day chocolate, around $1.8 billion goes toward candy, with at least 58 million pounds of chocolate bought during the week leading up to February the 14th. Hundreds of millions of dollars go into Valentine’s Day chocolates annually. It’s a massive industry, but if you really want to stand out from the humdrum gift-giving crowd, you’ll have to get creative with your chocolate-themed choices. Sophisticated yet playful gifts like personalized Chocolate Pizzas or Peanut Butter Wings, made with Swiss-style chocolate and homemade English toffee, will add heaps of artful distinctiveness to your chocolate-gifting game.