Elephants may be a surprising place to start this monthly motivational blog post. But again, maybe not. I believe that every entrepreneur, especially young entrepreneurs, need to be frequently inspired. My experience leading Chocolate Pizza Company reinforces that truth. The energy, renewal and insight that comes with reading an inspiring story is priceless. Entrepreneurs are constantly challenged or facing adversity and the drain on our spirit is real. We need to have our spirit refreshed.

With that in mind, I am using one blog post a month to offer inspiration. These posts will be uplifting, insightful and hopefully thoughts you share with family, friends and colleagues. I am starting with an excerpt adapted from my dad’s book, Inspired to Lead: 12 Powerful Lessons on Making a Difference. 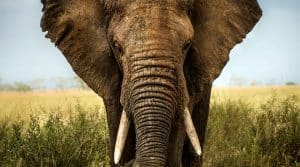 One day a grandmother took her grandson to the circus. The two watched the performers and sat mesmerized by all the exotic animals. But by far the one animal that captured the imagination of the little boy more than any other was the elephants. The beasts were enormous and yet moved so gracefully. They were so strong and yet had a gentle touch in the way they interacted with their keepers. But they were smart and quite brave too; never showing fear even when the tigers were in the same ring. Elephants were remarkable creatures and the boy wanted so badly to get even closer to them.

After a long day, the grandmother and grandson were walking slowly toward the exit when they cut behind one of the big top tents. As they rounded some crates, both stopped in their tracks and stared into the eyes of 5 adult elephants calmly eating piles of hay. The beasts paused for a moment and then continued curling one mouthful of hay after another with their long trunks. The boy was frozen in awe – the elephants seemed twice as big up close as they had in the ring.

A moment later, a man appeared from behind one of the elephants carrying a bucket and broom. Seeing the boy and his grandmother, he introduced himself and said his job was to keep the elephants clean and fed but that the two surprise visitors were welcome to stay a moment. The little boy could not contain himself. He asked how old the elephants were, how much they weighed, what they liked to eat, did they ever get tired and on and on and on.

The keeper answered every question. Then the boy noticed the rope around a back leg of each of the elephants. The rope was tied to a steel spike driven into the ground but next to the gigantic grey shapes it seemed like simple yarn. The boy asked the keeper how could that tiny rope holds back such a huge animal. Why couldn’t the elephants just break the rope and run free?

The keeper said yes the elephants were strong enough to snap that rope with one tug. The boy wondered why didn’t the elephants do that. Why didn’t’ they break free from something that held them back? The keeper explained that when the elephants are young they are not as strong. So, the ropes are able to hold them in place. The young elephant will tug and pull and try to free itself from the tether. But the ropes are always too strong for the young elephant to break.

The elephants grow up believing that a rope on their back leg is too strong for them to snap. So, eventually they stop trying. Even after they grow to a size and strength where they could easily break the rope, they don’t. In their mind, they believe the rope to be stronger. That’s the power of your mind the grandmother explained to the young boy. What you believe is what you achieve. The elephants could break free of the rope holding them back if they only realized how strong they were. But they remember failing when they were young and so they never try again.

Thanking the keeper for his time and courtesy, the grandmother and grandson walked away toward home. The two could not stop talking about those elephants and how they were really stronger than they knew.

There’s a bit of elephant in all of us at times. Business icon, Mary Kay Ash, said, “If you think you can’t, you’re right.” For better or for worse, we are programmable creatures. What we believe is what we achieve – or from another angle, what we believe we can’t do is what we will never do. What we accomplish on the outside all starts on the inside.

The elephant is one of the most intelligent animals on the planet and yet it is easily conditioned at a young age to associate a rope around its leg with an inability to break free. It learns it cannot do something and so it believes it cannot ever do that action even when its abilities have outgrown its limitation. It is easy to become products of our past especially when that past has limited us or held us back.

It’s important to ask ourselves from time to time if we are still tethered to things that we have long since outgrown – are we limited now simply because we believe something to be true that is not? In the course of our lives, we encounter many voices. Some are positive, uplifting, encouraging and empowering – they help us to grow and reach and dream. But sometimes there are negative voices that chide us, degrade us, diminish us; that focus on our failures, reinforce our shortcomings; highlight our inadequacies. Sometimes those voices are loud and repeated or from people we care about or respect and the impact on our lives can be significant.

There are those who elevate themselves by suppressing others with consequences that linger long afterward. These voices of doom and gloom become the rope that holds us in our place. They are the stake that keeps us tethered to what we could not once do. Negativity is a tie that threatens to keep us bound because we do not have the courage to believe otherwise.

Leadership is not about cutting the ropes that hold other people back. It’s about showing them that they already have the power to free their own potential. Leaders don’t do for others what they are incapable of doing for themselves. Rather, leaders light the fire inside others that let them see what they are capable of achieving.

It is natural for people to have doubts or to question their abilities or to feel the sting of past failure. But the difference between those who succeed and those who stay stagnant comes down to who is willing to persist. Also, who is not afraid to continually test the strength of new skills and the boundaries of new possibilities. We are indeed stronger than we know and more capable than we realize. As leaders, it’s about believing in that inner hero. We can’t allow that which tethered us in the past to hold us back from tomorrow’s bright promises.

Step up, step out and stretch the limits of your potential.