Cary Moon, owner of Moon’s Lake House in Saratoga Springs, New York, would not believe today’s potato chip. Legend has it that one of his cooks, George Crum, created what we now call potato chips as a prank for one very discerning customer back in 1853. Served then in the finest of fine dining traditions, the sliced spud has become an snack food icon.

But truth be told, there were recipes for “Saratoga Chips” that surfaced much earlier. For example, Englishman William Kitchiner’s famed 1822 cookbook Cook’s Oracle has a recipe for “Potato Fried in Slices or Shavings” which had the chef cut potatoes in “shavings round and round… dry them well in a clean cloth, and fry them in lard or dripping… send them up with a very little salt sprinkled over them.” This cookbook was a bestseller in both the UK and in America and six years before George Crum was even born. The Virginia House-Wife by Mary Randolph (1824) and Alexis Soyer’s Shilling Cookery for the People (1845) were two more examples of potato chip legacy that pre-date Crum’s story. Still, Upstate New York loves to claim potato chip genius.

Whatever the history of these classic treats, Americans eat a lot of them. According to the latest data, Americans eat 1.5 billion pounds of chips annually. The 3 most popular flavors are plain, barbecue and sour cream and onion. Super Bowl Sunday is the day that Americans consume the most potato chips. The potato chip is snacking royalty and no one messes with royalty. 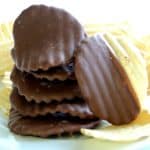 Well, almost no one. Chocolate Pizza Company, Central New York’s largest chocolate maker has taken that New York heritage and dipped it in Swiss-style chocolate. The resulting chocolate covered potato chips would probably shock even the cantankerous George Crum. Chocolate Pizza Company chocolatiers use gourmet milk or dark chocolate to coat crisp, rippled potato chips. The result is a salty-sweet snack that takes chips to the next level. Not surprisingly, there is even a version that comes splashed with sea salt. 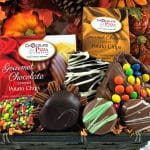 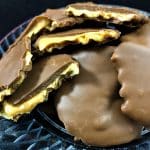 Chocolate Pizza Company owner, Ryan Novak, started with the business as a dishwasher when he was 15 years-old. In 2010, at age 21 and a senior at Syracuse University’s Whitman School of Management, Ryan became the owner. He has transformed the company from a small-town chocolate shop into an emerging national brand. The company’s unique chocolate gifts have been enjoyed by A-list celebrities, hall of fame athletes, rock and roll legends, top business and political leaders and chocolate lovers from 6 continents. The company has been featured on Food Network, Hallmark Channel’s Home & Family, CNBC’s On the Money, CMT’s Pickler and Ben as well as Forbes, People and Entrepreneur magazines.