Easter Baskets and the Easter Bunny were German Immigrants

Easter baskets and the Easter Bunny were traditions brought to America in the 18th century by German immigrants who settled in Pennsylvania. They brought the idea of the egg-delivering hare called, “Osterhase,” with them with children preparing nests for the bunny to leave brightly colored eggs on Easter. Eventually, the nests were replaced with Easter baskets that also tied into another ancient tradition. For centuries, Easter was marked with a large meal celebrating the end of Lent, a 40-day period during which many Christians abstained from certain foods or treats. On Easter Sunday, the meal was traditionally brought to mass in a large basket to be blessed. 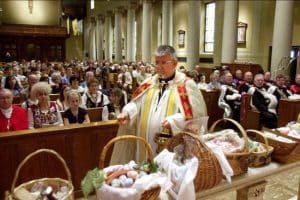 The tradition of bringing food in baskets to be blessed though pre-dates Christianity with early farmers using the spring equinox – a time when day and night are of equal length and the end of winter and beginning of spring and its renewal – as a time of prayer and blessing. Ancient Hebrews, Arabs, Assyrians, and Babylonians, celebrated the first seedlings of spring with a tradition of bringing the seedlings in baskets to temples to pray for a good year of crops. Easter maintains its connection to these ancient rituals by being the Sunday after the first full moon following the spring equinox.

Easter is the second best selling candy holiday in America behind Halloween. Chocolate eggs are among the most popular sweets associated with Easter, in part because the egg has long been a symbol of rebirth and resurrection and an integral part of Easter celebrations worldwide. The most popular non-chocolate treat during Easter is the marshmallow Peep which was first sold in the 1950’s. 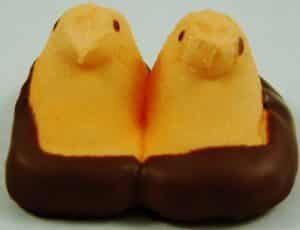 But chocolate is king for Easter treats. Modern Easter baskets always strive to have that one chocolate surprise that adds “wow” factor to Easter morning so Chocolate Pizza Company has taken that challenge personally. Or rather, it has personalized that challenge with its 6 ounce Easter Egg personalized with a child’s name. The edible work of art has pastel colored swirls dancing through gourmet milk or dark chocolate and the name scripted in white chocolate. The confectionery gem tells the lucky recipient that of all the Easter baskets out there, this one was made just for them. 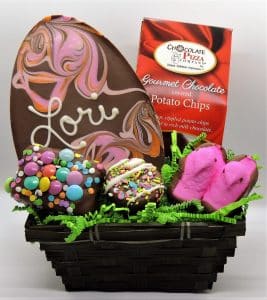 But even personalized Easter baskets need a supporting cast so we have added a 6 ounce boxed chocolate classics like potato chips, pretzels or almond bark, a chocolate covered rice crispy square with spring decorations, a pair of those famously popular marshmallow Peeps dipped in chocolate, and a spring decorated, chocolate dipped cookie. Beautifully presented in Easter over-wrap and bow it is impressive as Easter baskets go.

Chocolate Pizza Company and owner, Ryan Novak, are proud to contribute their gourmet chocolate specialties to Easter baskets shipped nationwide. Featured in Forbes, People and Entrepreneur magazines and on Food Network, CNBC, and the Hallmark Channel, Chocolate Pizza Company makes chocolate that is unique, delicious and impressive. Skilled artisans make every holiday special with items tailored just for that season including Easter including their trademarked Chocolate Pizza and Chocolate Pizza Slices. They are also famous for their trademarked Peanut Butter Wings, crisp, rippled potato chips covered in creamy peanut butter and drenched in rich milk or dark chocolate. Check out all the Easter baskets in their line-up on their website along with a host of other chocolate surprises.