Fathers Day may not generate the same level of excitement as its better-known counterpart, Mothers Day, but Americans still spend about $1 billion on gifts for dad. Officially celebrated now on the third Sunday of June, the first Fathers Day was first honored statewide in Washington in 1910 after a campaign by Sonora Smart Dodd, one of six children raised by a widower, convinced people in Spokane to create a day honoring fathers. In 1924, President Coolidge pressed for state governments to honor Fathers Day and in 1972 President Nixon proclaimed it a federal holiday.

There are more than 70 million fathers in the United States so having a day dedicated to dad makes perfect sense. But finding that perfect gift for dad is not always easy. Here is a little secret though, dad may say he doesn’t want anything for Fathers Day but the truth is he will be touched if you do remember him. When it comes to dads, behind that rugged exterior is a boy who still enjoys a sweet surprise. 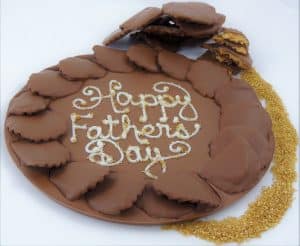 Chocolate Pizza Company is your gift-giving headquarters for Fathers Day. We make great tasting chocolate that is fun and delicious. “Pizza & Wings” is the perfect gift idea for dad when the “pizza” is Chocolate Pizza and the “wings” are our famous Peanut Butter Wings. Chocolate Pizza blends homemade English toffee with rich milk or dark chocolate, pours it into a pizza pan, tops it with candies or nuts and serves it in a genuine pizza box. It is the coolest gift you can get. And those Peanut Butter Wings are ridiculously delicious. Crisp, rippled potato chips covered in creamy peanut butter and drenched in milk or dark chocolate make a taste masterpiece that dads love.

The neat thing about Chocolate Pizza and Peanut Butter Wings is that it is a gift dad can share. It is that special something that he probably would not treat himself to but that he always wanted to try. The quality of the Swiss-style chocolate is exceptional and reminds him with every bite that this is no ordinary chocolate treat. He will also like the fact that it is made in America and that the company’s owner, Ryan Novak, started there as a dishwasher when he was 15 years-old.